To the students who arrive in Coimbra, and to all visitors, we leave here a small itinerary of the city so that you can get to know its most emblematic points.

Starting the tour right in the historic centre of Coimbra, right in the "downtown" area, you must visit the Santa Cruz Monastery, with the status of National Pantheon, due to the presence of the tombs of the first kings of Portugal D. Afono Henriques and D. Sancho I. 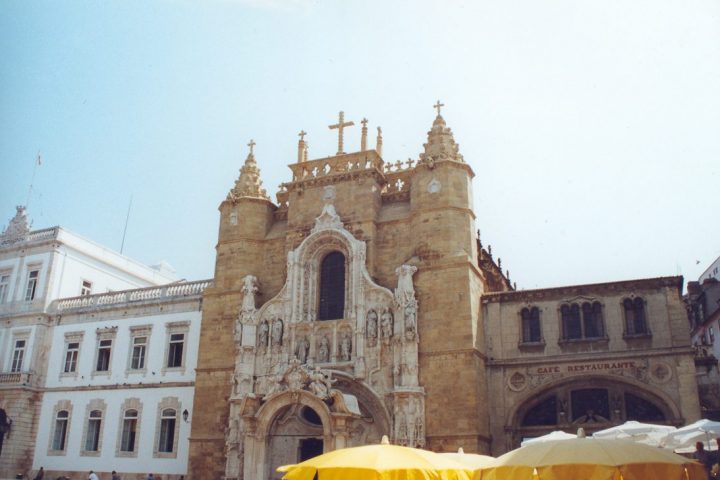 Walking then along Rua do Comércio, you reach one of the indispensable attractions of the city, which serves as gateway to the matrix of alleys that characterises and symbolises the “high” of old Coimbra: the Arco de Almedina. It is also symbolic for the students who, once they are dressed, can only pass there with their cloak drawn in silence, as a sign of respect. A few metres up, you go by the Statue of the Tricana, symbol of the women of Coimbra. Going up the “quebra-costas” (a street with stairs) we come across the Sé Velha (Old Cathedral), which began to be built when King Afonso Henriques declared himself King of Portugal and chose Coimbra as the capital of the kingdom. It is here that the Monumental Serenade is held during Queima das Fitas, the week of academic festivities which takes place every year in May. Further up the street is the Machado de Castro National Museum. It has an important collection of sculpture, painting and decorative arts and occupies the former facilities of the Episcopal Palace of Coimbra (where the old Church of St John of Almedina used to be). On the ground floor of the Museum there is the Roman cryptoporticus, with a vast network of galleries and communicating spaces. It was this space that formerly supported the Roman forum. There is also the old Episcopal Palace, with multimedia rooms and temporary exhibitions, and the new building, which houses much of the museum’s collection, also including a terrace overlooking the houses.

Just beyond is the Sé Nova, built in the 16th century, which was the first Jesuit college in the world. It is also a place that marks the academic path, since the ceremony of blessing the ribbons takes place there.

Nearby is the Porta Férrea, which gives access to the University’s Courtyard of Schools and the Joanine Library. It is here that the students of Coimbra draw their capes for the first time, on the night of the Monumental Serenade. As a place to rest and walk, there is, not far away, the Botanical Garden. A place where collections of plants from all over the world can be found and endangered species are preserved in their natural habitat.

Going a little further up, you will find Penedo da Saudade, now a garden, whose name comes from the legend that D. Pedro used to visit the place and weep there for the loss of his beloved Inês. In this garden, we can find tombstones with verses, busts of poets and tributes from former students to the city. In front of this garden, there is the Cultural Centre Penedo da Saudade, created in 2019 by the Presidency of the Polytechnic of Coimbra, which offers a programme of cultural initiatives throughout the year, open to the community.

As you walk down the city streets towards the Mondego River, you come across the Mondego Green Park, an area of over 400 thousand square metres, with paths for walking and cycling, skatepark, an area with sand for beach volleyball, sports and exhibition pavilions, canoeing and paddle facilities, among others. It is also on the banks of the Mondego that the freshmen are baptised during the Latada week, which usually takes place in October, and which marks the beginning of the academic year and the welcoming of the new students.

Crossing the river via the Pedro e Inês pedestrian bridge, you will find the Santa Clara-a-Velha Monastery, whose ruins are one of the earliest examples of Gothic architecture in the country. 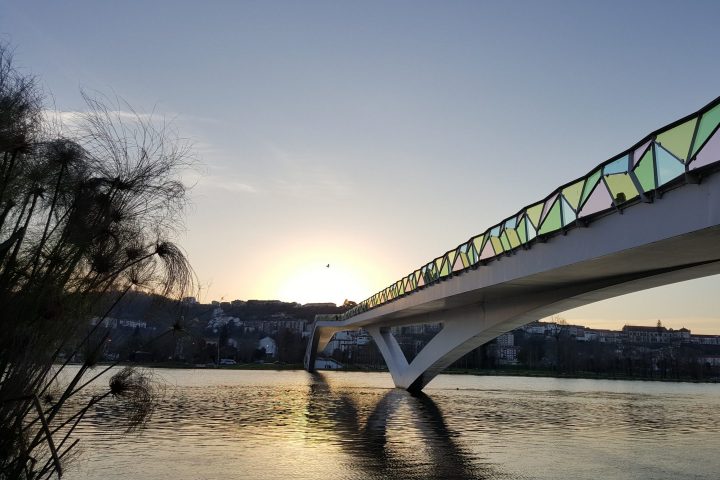 The visit to the monastery includes the ruins and a museum centre that includes the convent’s archaeological heritage. The monastery was founded by Queen Isabel in the 14th century, who lived there after the death of her husband, King Dinis. The monastery had been abandoned since the 17th century due to the constant flooding caused by the Mondego River. A new monastery, Santa Clara-a-Nova, was built on top of the Santa Clara plateau to replace it. Built in the Baroque style, the city’s patron saint lies there, in the original tomb dating from the 14th century, and in honour of whom the Holy Queen’s festivities are held every two years in Coimbra. The monument is open to visitors and has a belvedere with a fantastic view over the city.

On the way down, we also find the Convento São Francisco which, after a redevelopment project, reopened in 2016 as a cultural venue with a diverse agenda, including concerts, plays and dance shows. Next door is Quinta das Lágrimas, a place populated with trees and ancient fountains, with a 19th-century palace and neo-Gothic ruins. Here, you will be able to get a close look at the scene of one of Portugal’s best-known love stories, the forbidden love between the prince of Portugal, D. Pedro, and a Galician maid, D. Inês de Castro, the Quinta das Lágrimas garden. The famous Fountain of Tears symbolically evokes the tears and blood shed by Inês de Castro when she was tragically executed in 1355 by order of Pedro’s father, King Afonso IV.

Make sure you also visit the Choupal National Forest. With an area of 79 hectares, this is a favourite spot for outdoor activities, with paths for running, walking and cycling, where there is also a picnic area and a café. It is possible to make the walk from the city centre to the forest, walking through the area along the Mondego river.